Stress fractures are no fun.  Especially if they reside in your left foot, aka your turning foot if you’re a dancer.

My foot had been bothering me for a while.  I know I have tendonitis in the top of my left foot already from years of dance but when a sharp pain developed in my big toe, I started to worry.  It started acting up around Week 5 of my Couch to 5K training but I chalked it up to overuse and moved on.  When I woke up on Friday morning with a painful (and gross looking) broken blood vessel in the same foot and throbbing in my toe, I knew sucking it up might not be best course of action.  Doctor, here I come.

I more or less expected the result.  Minor stress fracture, pain from imflammation, and a broken blood vessel that should go away in a few days.  My doctor gave me a prescription for high dose ibuprofen with the consoling words, “I’d tell you to stay off of it, but I know you won’t.” Smart man my doctor.  I decided to take a few days off since I was in for a busy Saturday anyway and hoped that by Sunday, some of the pain would subside for my dance rehearsal.

Later that day, I headed down to Hanson with my friend Alyse to celebrate our other friend, Swy’s, 23rd birthday.  I made this cake for her.  Talk about a project and a half.  I am no Duff Goldman, but I think it turned out pretty good.  And it was quite delicious if I do say so myself.  I found it in a Food Network magazine.  (Chocolate cake, vanilla icing, toasted coconut.) 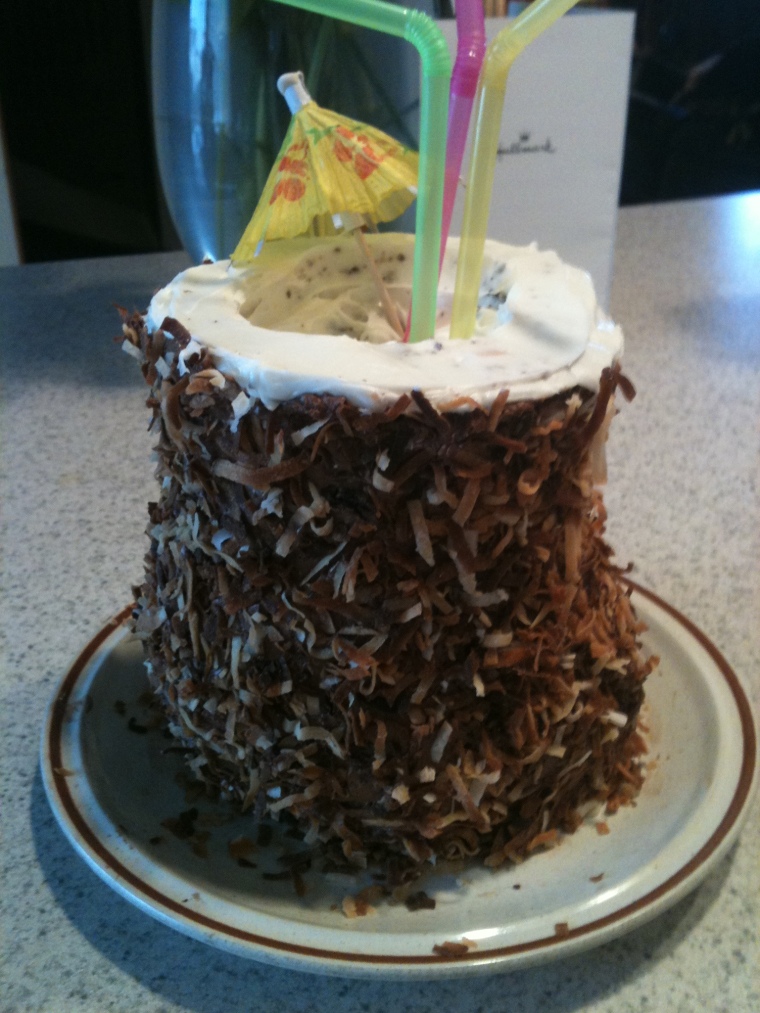 On Saturday morning, Alyse and I enjoyed Mary Lou’s coffee on the way home where I had roughly an hour to get ready for a graduation party with Stephen’s family in New Hampshire.  We had a great time, ate lots of yummy grilled veggies with hummus and I enjoyed a (large) glass of Cabernet.

That night, Stephen and I made a shrimp/veggie stir-fry for dinner.  Nothing fancy, just tossed a bunch of frozen veggies in a wok, made some basmati rice, threw in the shrimp last minute and voila.  It was delicious, especially the quick wheat biscuits I made to go with it.  We also finished a bottle of Asti I bought for him because we were celebrating.  Not only is Stephen graduating from college on Thursday with an x-ray degree, he also has a job already!  (Seriously, he’s out of school 3 seconds and has a job.  I’ve been out of college a year.. where’s mine?!)  Regardless, celebrations were in order.  Just wait til he sees the gift I bought him.  I’d tell you now but he reads this… sneaky.

On Sunday my mom had one thing planned for the morning: My FAFSA.  More like the bane of my existence.  Paying for college is hard enough without tacking on an additional $45,000.  Whatever, BU, you better get me a job when I’m done.

Around 2pm, I headed to Boston for my DanceWorks photoshoot/dress rehearsal.  It’s hard to imagine that the past few months have flown by and our show is a little over a week away but I am more than excited for it.  I danced all through college but we never really had dance shows like this.  It’s like being in recital all over again…something I haven’t experienced since high school.  Needless to say, I’m pumped.

The rehearsal went great.  We each got our photos taken (headshots and full body poses), learned some of the finale routine and ran through each dance in show order.  During the show itself, I think it’s a pretty safe bet that I will be throwing my costumes around backstage between routines and trying not to look like a bright red lobster during the entire show.  Ha. We’ll see.

After rehearsal, we had a mini pizza party in the food court of the Pru.  I made some sugar cookies for the girls.  I think they went over pretty well. 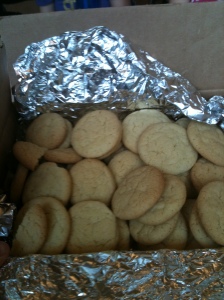 I rounded out Sunday night with Stephen (I swear we aren’t actually attached…)  We made pork and broccoli for dinner and pistachio cupcakes for dessert (sans frosting so I hesitate to call them cupcakes but that’s how Stephen refers to them.)  Overall, besides the stress fracture, it was a very successful weekend. 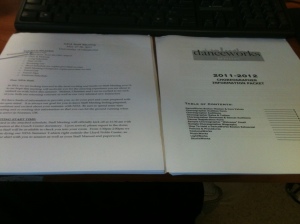 I WANNA KNOW!! What is the fanciest dessert you’ve ever created? How did it turn out?

One thought on “My Weekend Recap”