Three weekends ago (seriously where does the time go??) Sean and I attended the 2017 Boston Wine Expo and I think this one was the best yet. This was our fourth year in a row attending and I can honestly say that like a fine wine, this event gets even better with age. 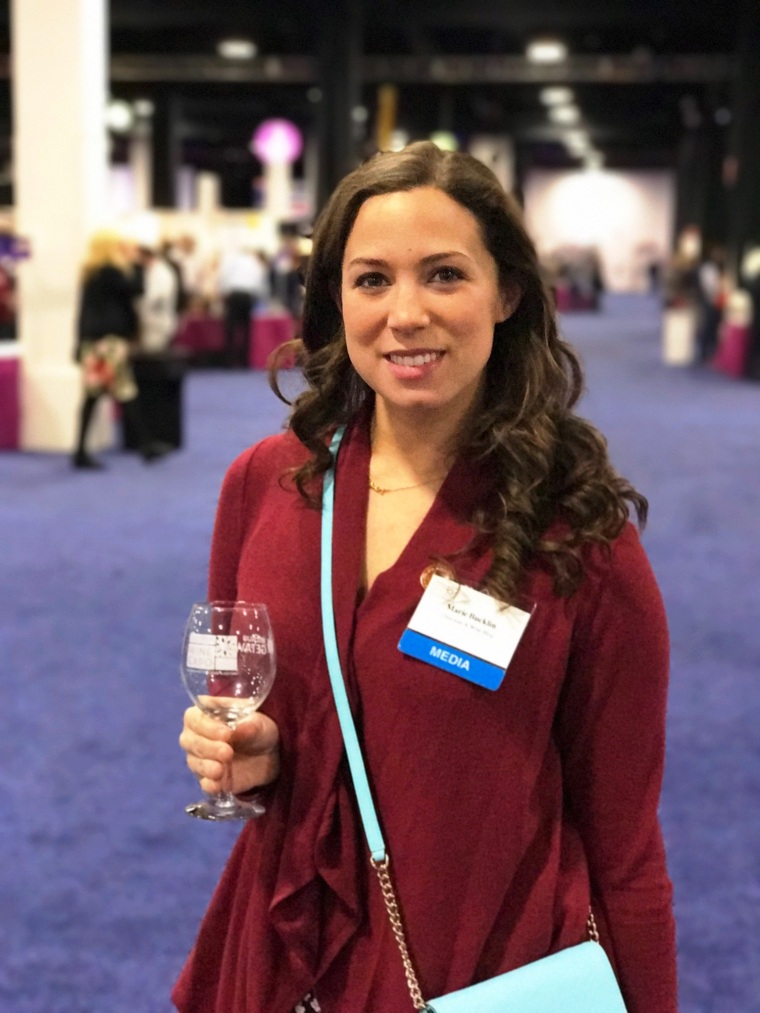 We arrived for the media and trade hours at 11:00 AM on Saturday and did a quick loop of the floor. This year, we noticed more food and snack vendors flanked the main aisles (shout out to Primizie who makes some super delicious crisps and chips!) We knew we’d be back more than once to this section of the floor because its essential to eat during the four (or in our case, six) hours that the Expo is open.

Each year, the trade floor is set up a little differently. This year was a little tougher to navigate because they did not have the sections set up by region or country as they have in the past. Nevertheless, we hit the ground running with wines from Spain and made it all around the world during the two days. I’ve said it in previous posts about the BWE, but I think its 100% worth it to attend both days of the Expo because the floor is just too large to get through in one afternoon.

This year, the Expo also had a great “Social Spot” where people could sit and work on tweets and posts or snap some fun photos. It was nice to be able to pull over to a designated area to get my life in order while I was live tweeting and Instagram-storying all day instead of bumping into fellow Expo goers; I hope they repeat this area next year.

So… the wine. I was pleased to see some old favorites, like 90+ Cellars, as well as some new faces like Res Fortes. Trying wine from all over the world is such a unique and rare experience but it’s fun to branch out to countries like Georgia or Israel when you probably aren’t purchasing and drinking wine from these places on a regular basis.

90+ Cellars. (Check out some desserts I made with a few of their wines here!)

From the country of Georgia.

And from the Vintner’s Lounge…

Duckhorn. (Although I was definitely missing their Goldeneye Pinot Noir this year!)

The Vintner’s Reserve Lounge is one of those places where you can’t believe you are tasting wines that could be anywhere from $50 up to over $500 per bottle. It’s quite the experience. This year, we were able to go at noon on Sunday so it was a fantastic way to kick off Day 2 of the Expo. Along with the premium wineries, they also had a showing of restaurants and food vendors like Del Frisco’s handing out small bites.

We were a little disappointed not to see our favorite Rioja region represented this year but with any luck they will be back for 2018. That aside, it was another fantastic Boston Wine Expo and it continues to be one of the best Boston events every year. I cannot recommend it enough to all wine lovers or those looking to experience wine in a different way.

Until next year, Cheers! 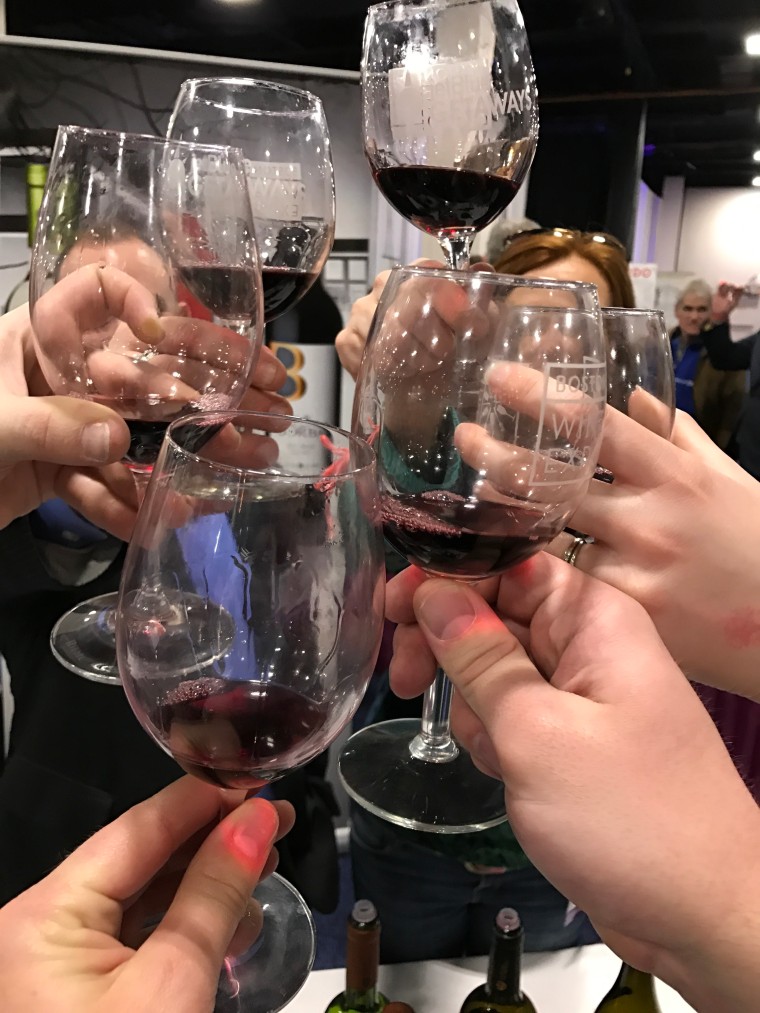 I was provided weekend and Vintner’s Lounge tickets to the Boston Wine Expo as part of their brand ambassador program. All images and opinions are my own.

I am holding onto summer with every fiber of my being.

This summer was nothing short of fantastic and I’m not quite ready to let it go. I said goodbye to my mid-twenties (and hello to 27), tried disc golfing for the first time, Sean and I had our engagement photos taken (!!!), we went to St. Maarten to watch his sister get married, and then proceeded to watch 3 more sets of friends get married. For the most part, the weather was beautiful, and now that we live somewhere with a back porch (albeit tiny), we adorned it with two Adirondack chairs, a bistro table and a  high-quality grill, transforming it into a little piece of #heaven.

Now, don’t get me wrong – I love everything about fall. I love the sweaters, the boots, apple picking, cider, PUMPKIN ALL THE THINGS. I am a New England girl through and through. But after last winter (I see you Juno….) I feel the need to have summer a little bit longer. I will not let it go until the official first day of fall. Who’s with me?

Barefoot. Barefoot is with me.

It should come as no surprise that I love dry wine. The dryer the better. Usually of the California or Italian variety. To me, there’s almost nothing better than that dusty mouthfeel after sipping the driest of reds. But sometimes, especially in the summertime, you need something a little sweeter, a little bubblier. Spritz-like. Enter Barefoot Refresh: cold, bubbly. The perfect addition to my wine collection.

It’s rare that I forgo my tried-and-true reds, but this summer was full of hot days. And I mean H-O-T. When it’s 90+ degrees and I’m sitting by the pool or on the deck, nothing really compares to a wine that is both cold and refreshing. Earlier this summer when Barefoot introduced me to their Spritzer collection, I was immediately hooked. It’s the perfect sipping wine when you’re kicking back and enjoying the lazy days of summer (or clinging dearly to the few you have left.) Whatever you are in the mood for, Barefoot’s got you covered. Want something juicy? Their summer red blend will quench your thirst. Opting for something with a little more acid and bite? Their white is right up your alley.

My favorite may actually surprise you. This year has been a year of branching out for me. I enjoy beer now (what?) and I’ve also really gotten into whites. So in this case, Barefoot’s Sweet California Spritzer was the one I kept coming back to. And if you ask me, it’s never a bad time of year to enjoy this kind of wine. And luckily, there’s still a solid week of summer left, so you still have plenty of time!

If you need me, I’ll be on the porch with a bottle of Barefoot, soaking in the sun and holding onto summer for a few more days.

Did you get a chance to try Barefoot’s Spritzer Collection this summer? Which one was your favorite?

Disclosure: Barefoot provided bottles of their Spritzer Wine to me free of charge in return for my review. As always, all opinions here are my own.

I love brunch. Everything from pancakes, to french toast, omelets and even the occasional burrito. All topped off with a mimosa. I mean, what could be better on a Sunday morning?

In addition to loving brunch, I also love trying new places for brunch. When the Boston Brunchers had an upcoming event at the Beat Brasserie (aka Beat Hotel) in Cambridge, I jumped at the chance. 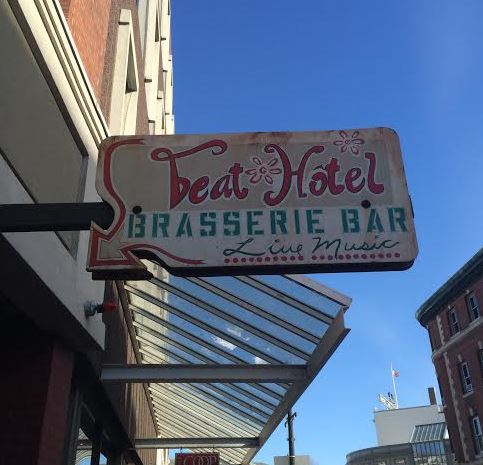 I used to go to Boston Bruncher events pretty often. When I got a job and moved to New Hampshire, they became further between, mostly because getting to the city on a Sunday morning is usually on the tough side. But this particular Sunday, which also happened to be the same day as the Super Bowl, it was perfect timing. Fiance (I love calling him that…) slept in, while I got up and headed to Cambridge. As I drove down, I realized the last time I went to a Boston Bruncher brunch was 2 full years ago!  Definitely not letting that much time pass between these brunches again!

I was the first to arrive at the Beat Brasserie and took in the atmosphere. It had an eclectic, yet cozy feel that I immediately enjoyed. Chandeliers of merlot-colored beads hung draped around the restaurant providing a warm glow, and there was an empty band set up at the very back of the floor that would eventually have musicians behind it to play for us while we ate.

I sat at a table with Lianna, Taryn and Melissa. We decided to order a bunch of things for the table and share, starting with the Caramelized Apple and Cranberry Coffee Cake.

This cake was everything I wanted in coffee cake and more. It was super decadent and rich, but the flavors of the apples and cranberries really came through. I could’ve eaten the entire piece by myself with no problem. It also came with a dollop of cinnamon honey butter which was like an added layer of crack onto this already addicting slice of heaven.

I also went with a traditional mimosa as my drink of choice. Normally, I try to order a specialty house drink when I am at a new brunch place but was feeling like a tried and true brunch staple that day. It did not disappoint. I had two. And maybe four cups of coffee. And a gallon of water. I don’t think my water glass was ever empty. Needless to say, I was hydrated and the staff was really conscious and helpful.

It wasn’t long before we had an entire table covered in food.

Everything from Wild Flower Honey and Lemon Pancakes to Braised Short Ribs Eggs Benedict to a Mushroom & Fontina omelet with steak frites and a side salad. There was even delicious lamb sausage that was surprisingly spicy (in a good way) and what they called the Bowl Azteca with Faroe Island Salmon that I did not try. The four of us took a little bit of each dish to sample (after snapping photos of course!)

The pancakes were light and airy, and came with a sweet berry compote that complimented the pancakes nicely. There was also a spoonful of the same cinnamon honey butter from earlier on top, but the pancakes were so flavorful and pillowy on their own, I didn’t think they really needed any extra butter. However, getting a bit of pancake and berry compote together in one bite was pancake heaven. The omelet was good; I’m always a sucker for fontina cheese, but slightly underwhelming compared to the pancakes. By far, my favorite was definitely the Eggs Bennie, and it was a hit among my co-brunchers as well. The braised short ribs were buttery and rich, the egg perfectly poached, and the side salad was dressed just enough (no one likes soggy salad.) It was an innovative take on one of my all-time favorite breakfast foods and certainly did not disappoint.

The entire morning was relaxing, not one bit rushed, and I left feeling rejuvenated and ready to tackle my Sunday (which included making these De-Pudged Piggies in a Blanket, screaming way too loud at the TV during the Super Bowl, and crying when the Patriots won the whole thing.)

Have you tried the Beat Brasserie for brunch? What was your favorite thing on the menu?

Disclaimer: Brunch was provided to me free of charge in return for my review. But, as always, all opinions are my own.